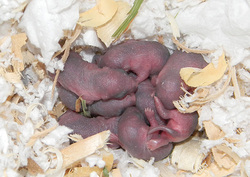 Saria gave birth to 9 pups on the 7th! There are 8 surviving, and they all are dark eyed and dark pigmented. This means no Siamese or nutmegs/CP nutmegs. Pups are black, with the possibility of Burmese, slate, and CP slate. I took a quick peek, and it looks like there are 2 girls and 6 boys, but it's still early! 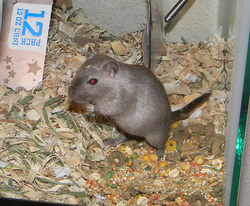 I know it's a while since the last update, but not much has been going on. Somethings have been though - we have a new pair together: Swarley and Saria! They have been together for several weeks now, and Saria is just about ready to give birth. Looks like it's going to be a big litter! I will be contacting those of you on my wait list once she has her pups.

We have some terrible news to announce. Unfortunately, Treble and her entire first litter have failed to thrive and passed away. Our veterinarian was unsure of the cause of Treble's illness, but there were never any signs of anything infectious, and no one else has gotten ill. Regardless, I am undergoing a quarantine just in case.

Also, Tink and Purl have been adopted out to a pet home.

Treble gave birth to four pups yesterday morning! Three seem to be dark pigmented, one of which is solid. The fourth is still a mystery! Treble is a pretty nervous first-time mom, so she's going to need her space. 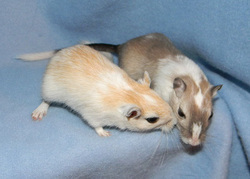 Lots of news over the past month! First, Neil Armstrong and Treble are happily together, and were observed mating on November 1st. Expect a litter by the end of the month!

The "Gerbil Care" page is finally under construction, and should be more complete over the next few days.

We also have several new additions to our clan - Zelda, a stunning dark-eyed honey girl, her brother Ted, a handsome nutmeg with the fluffiest tail! The newest addition is Lorenzo von Matterhorn, a gorgeous colorpoint dark-eyed honey male who is only about 12 weeks old! 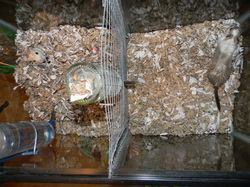 Neil Armstrong and Treble were put together in a split cage on the 17th. Hopefully they'll start to like each other quickly!
Check out my Breeding Pair page for more information. 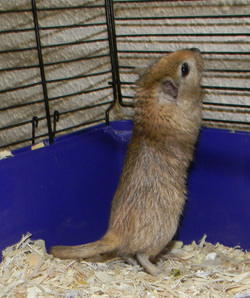 Swarley is an awesome little nutmeg boy with an AMAZING personality! He is one of the friendliest gerbils I ever met in a pet store. There were PEW and dove gerbils in with him, so if those are his siblings then there is a chance he may carry a colorpoint gene! Regardless of this, his stellar personality will make an excellent contribution to our breeding program. 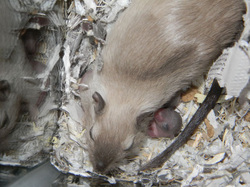 Nutella gave birth to 5 pups on October 3rd! It looks like we have three Burmese boys and two Siamese girls.

Welcome Purl, a young colorpoint female from a pet store. I'm not positive what kind of colorpoint she is; I think she still has another molt to go through. My guess is nutmeg or silver nutmeg. The guy at the store said she was attacked by another gerbil. She has a hurt front leg that she isn't putting any weight on, so I'm working on helping her get that all healed up. She is also very skittish, so I'll be working on getting her tamed as well and then we'll see if she is breeding material.

Expect a new litter of Siamese and Burmese any day now! This will be Nutella's last litter. She has already been separated from Bullwinkle and will be retired with a daughter from this litter.